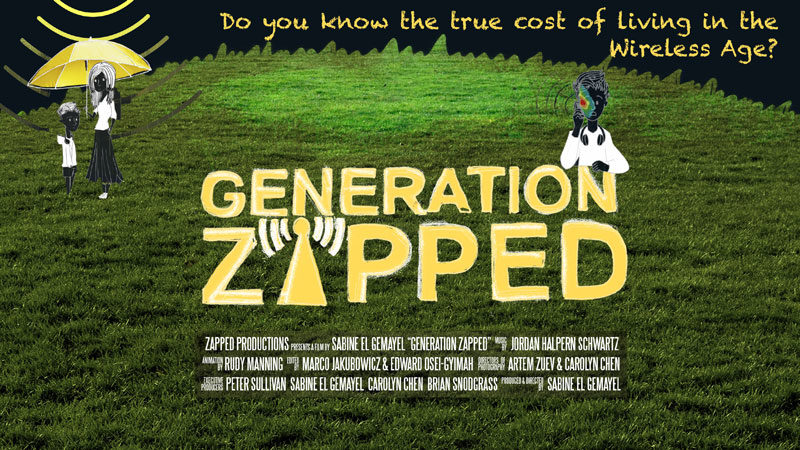 GENERATION ZAPPED investigates the potential dangers of prolonged exposure to Radio Frequencies (RF) from wireless technology; its effects on our health and well-being, as well as the health and development of our children. This includes links to breast and brain cancer, to its associations with increased infertility and genetic mutations related to autism and ADHD, to newly identified illnesses, such as electrical hyper- sensitivity (EHS).

This film was born of a personal and deep investigation by Executive Producer Peter Sullivan as to why his two sons growing up in the tech capital of Silicon Valley, California, were manifesting signs of being on the autism spectrum. Peter has funded studies to try and find out why some people are sensitive to low frequency radiation, including his own sons. He teamed with award winning film director Sabine El Gemayel, herself a mother of three teenagers, who is intensely concerned about the impacts of wireless technology on children and young adults.

Together, Sullivan and El Gemayel have created GENERATION ZAPPED as a social-awareness documentary combining personal stories from others directly affected, along with discussions with doctors, health researchers, and other experts discovering the mounting scientific evidence. The film features public health policy experts who are fighting to revise long outdated policies and safety regulations.

GENERATION ZAPPED provides hope – by suggesting simple guidelines for how to protect and safeguard ourselves and our families against these potential dangers.

In less than a generation, cell phones and the Internet have revolutionized virtually every aspect of our lives, transforming how we work, socialize and communicate. But what are the health consequences of this invisible convenience? As a mother of teenagers I am concerned with the shadow side of wireless technology on our children. I am troubled by the increased health risks and how it is sociologically impacting childrens’ development and behavior. As a citizen and consumer, I am disturbed by the business ethics behind the wireless revolution and its ubiquitous use in schools, at work, and at home.

I love technology and the many conveniences it has offered us, yet I believe that increased transparency is vital, including pre-market testing, post-market monitoring, and revised policies and regulations.

Finally, I invite audiences to consider the case for honoring the precautionary principle when it comes to the adoption of wireless technology—to simply slow down, turn it off at night and “plug it in” until more extensive research is validated and complete.


TIPS FOR YOUR SAFETY

• Get wired. Prefer wired connection. They don’t use microwaves to transmit information. That means prefer a wired desktop computer and favor corded phones. You can transfer your wireless calls to your landline.
• Get off the grid. Turn your router and devices Off or put on Airplane mode and Bluetooth Off when not in use. Don’t use wireless devices in metal enclosures like cars and elevators.
• Get pure sleep with no wireless devices in your bedroom unless on Airplane mode. EMF affects your melatonin secretions and your brain.
• Get time conscious. Decrease your exposure time by speaking less on cell phones, switching ears if you have to talk and minimizing your time spent in Wi-Fi hotspots.
• Get it out of your pocket to prevent infertility and out of your bra to prevent breast cancer.
• Get sight. Look out for cell phone towers near you and your children’s school and lobby to get them removed. Opt out of smart meters and smart home alarms.
• Get smart. Apply all of the above to minimize firsthand and secondhand radiations. Especially for children and pregnant women.

• IGOR BELYAEV, Dr. Sc.
Cancer Research Scientist
Head, Laboratory of Radiobiology, Cancer Research Institute, Slovak Academy of Science BMC SAS
Dr. Belyaev is formerly a member of: The Working Group of the International EMF Project of the World Health Organization, the Working group for the evaluation of RF carcinogenicity of the International Agency on Research in Cancer (IARC); the Stakeholder Dialogue Group on EMF, Health systems and Products, Risk Assessment, Health and Consumers of the Directorate-General, of the European Commission.

• DOMINIQUE BELPOMME, MD, PhD
Oncologist
Founder/President ECERI (European Cancer and Environment Research Institute), Belgium
President of the ISDE-France (International Society of Doctors for the Environment), France
President of ARTAC, (Research on Treatments Against Cancer), France
Professor Belpomme has published many scientific papers in peer reviewed journal and has written several books for the medical society as well as for the general public. He is one of the worldwide recognized leaders working on the causal links between the environmental degradation and the origin of cancer and other diseases.

• MARTIN BLANK, PhD
Associate Professor, Physiology and Cellular Biophysics
Columbia University
Author of Overpowered
Dr. Blank is an expert on the health-related effects of electromagnetic fields and has been studying the subject for over 30 years. He earned his first PhD from Columbia University in physical chemistry and his second from the University of Cambridge in colloid science. From 1968 to 2011, he taught as an Associate Professor at Columbia University, where he now acts as a special lecturer. Dr Blank has served as an invited expert regarding EMF safety for Canadian Parliament, for the House Committee on Natural Resources and Energy (HNRE) in Vermont, and for Brazil’s Supreme Federal Court.

• ERNESTO BURGIO, MD, PhD
Pediatric Cancer Scientist
President of the Scientific Committee of the International Society of Doctors for Environment (SCISDE)
Dr. Burgio graduated in Medicine and Surgery at the University of Pavia – Italy before specializing in Pediatrics at the University of Florence-Italy. His research focuses on pediatric cancers related to environment pollutants including EMFs.

• DAVID CARPENTER, MD
Co-Editor of the BioInitiative Reports
Director of the Institute for Health & Environment at University of Albany
Dr. Carpenter’s research focused on the relationship between exposures to a variety of chemicals and ionizing radiation on incidence of several human diseases, including diabetes, hypertension, heart disease, and diseases of the nervous system. The Institute which he directs has recently been identified as a Collaborating Center of the World Health Organization. He has more than 350 peer reviewed publications and has edited five books. He is the Co-Editor of the Bioinitiative Report (www.bioinitiative.org), and has published extensively on human effects of both powerline and radiofrequency electromagnetic fields.”

• GEORGE L. CARLO, MSC, JD, PhD
Former Chairman of the Wireless Technology Research (WTR), 1990 – 1996
Author of Cell Phones: Invisible Hazards of the Wireless Age
George L. Carlo is a world recognized medical scientist, best-selling author, and attorney. He has advised a wide range of federal elected officials and has testified before Congress on a number of public interest issues. His discoveries have been incorporated into U.S. and global patents in areas including anti-viral vaccines, medical devices, and environmental protection technologies. He presently holds appointments as Chairman of the non- profit Science and Public Policy Institute based in Washington, D.C.. and as a Visiting Professor at Longwood University in Farmville, Virginia.

• DEVRA LEE DAVIS, PhD, MPH
Epidemiologist
Author of Disconnect – The Truth About Cell Phone Radiation and When Smoke Ran Like Water
Dr Davis was former Senior Advisor to the Assistant Secretary for Health in the Department of Health and Human Services, a member of a team awarded the Nobel Peace Prize in 2007 with the Honorable Al Gore, founding Director of the Center for Environmental Oncology, University of Pittsburgh Professor of Epidemiology at the Graduate School of Public Health. She is currently President of Environmental Health Trust, a non-profit working to identify and avoid environmental health hazards.

• VICTORIA L. DUNCKLEY, MD
Integrative Child and Adolescent Psychiatrist
Author of Reset Your Child’s Brain
Dr Dunckley, is an award-winning integrative child psychiatrist, author, researcher, and forensic consultant based at the Centre for Life in Los Angeles. She is an internationally recognized expert on the impact of screen-time on brain health and development, and is a leading voice regarding screen-time’s influence on psychiatric disorders, addiction, and the overuse of medication in children.

• LENNART HARDELL, MD, PhD
Oncology Epidemiologist
Former Professor of Cancer Epidemiology, University Hospital Orebro, Sweden
Dr Hardell has a long career as a clinical and medical research doctor, currently at the Department of Oncology, University Hospital, Örebro, Sweden. He is specialised in oncology with a focused interest in environmental risk factors for cancer that he has studied in epidemiological investigations. In recent years much of his research has focused on use of mobile phones and cordless phones and the risk of brain tumours. He has published more than 300 peer-reviewed scientific articles.

• OLLE JOHANSSON, PhD
Associate Professor in Basic and Clinical Neuroscience
Karolinska Institute, Sweden
Olle Johansson, is a world-leading authority in the field of EMF radiation and health effects. Among many achievements he coined the term “screen dermatitis” which later on was developed into the officially recognized functional impairment electrohypersensitivity. His studies have been widely recognized in the public media, including newspapers, radio, and TV as well as on the Internet, both nationally as well as internationally, and he is a regular interview guest in magazines, journals, tabloids, and newspapers, as well as in radio shows, TV programmes, and in the Internet- based news blogs and websites.

• JOEL M. MOSKOWITZ, PhD
Director, Center for Family and Community Health, School of Public Health
University of California, Berkeley
Dr. Joel Moskowitz and his colleagues published a review of the research on mobile phone use and tumor risk in the Journal of Clinical Oncology in 2009. Since then he has served as a resource for policy makers and the press regarding wireless radiation safety.

• BILL PIAZZA
Environmental Engineer at Air Quality Dynamics, LAUSD
Piazza is the head of risk management and the environmental assessment coordinator for odors and emmissions in the Los Angeles Unified School District’s Office of Environmental Health and Safety. He has worked for over a decade to assess the health effects of various emmissions in populated areas.

• JONATHAN SAMET, MD, MS
Director, Institute for Global Health, University of Southern California
Distinguished Professor and Flora L. Thornton Chair for the Department of Preventive Medicine, Keck School of Medicine of USC
Dr. Samet, a pulmonary physician and epidemiologist, has centered on epidemiologic research on threats to public health using research findings to support policies that protect population health. He chaired the Working Group of the WHO International Agency for Research on Cancer that evaluated radiofrequency electromagnetic radiation.

• DAFNA TACHOVER, Esq., MBA
Attorney with Electro Sensitivity
CEO, We Are The Evidence
Tachover is the founder of “We Are The Evidence”, an advocacy organization for the protection of the rights of people who have been injured by wireless technology radiation. She is an attorney in NY and Israel. Since she developed Electromagnetic Sensitivity (“ES”) in 2009, she has been dedicating her work to the topic including lecturing, PR, lobbying, and litigating.

• JOHN WEST, MD
Oncologist, Director of Surgery
Breastlink of Orange, California
Author of Prevent Survive, Thrive: Every Woman’s Guide to Optimal Breast Care
Dr. West became fascinated with the multidisciplinary team approach to breast cancer care in the mid 1980s. He has been recognized as one of the “Best Doctors in Orange County.” He has been the lead author in 20 peer reviewed articles and has written two previous books.